Hors La Loi (Outside the Law)

20 replies to this topic 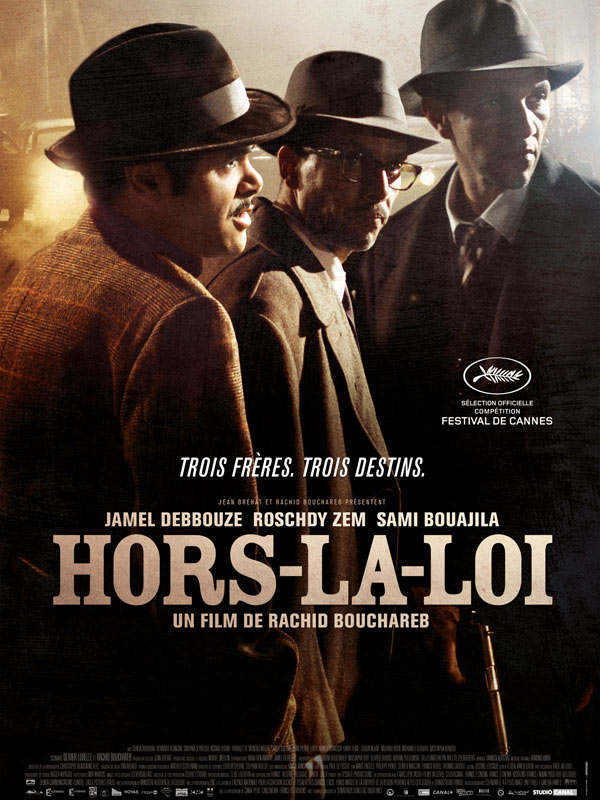 Outside the Law (Hors-la-loi) is a 2010 drama film directed by Rachid Bouchareb, starring Jamel Debbouze, Roschdy Zem and Sami Bouajila.

The story takes place between 1945 and 1962 and focuses on the lives of three Algerian brothers in France, set to the backdrop of the Algerian independence movement and the Algerian War. It is a standalone follow-up to Bouchareb's 2006 film Days of Glory, which was set during World War II. Outside the Law was a French majority production with co-producers in Algeria, Tunisia
and Belgium.

A historically unorthodox portrayal of the 1945 Sétif massacre sparked a political controversy in France. The film will represent Algeria at the 83rd Academy Awards, where it is nominated for Best Foreign Language Film.

Torrent Link - Thanks to BLACKSTAR

From the same director of Les Indegenes, so I can only expect it to be great. I haven't watched it yet, so i'll comment once I do.

no meriem we said " déjà" in french

oh Beebs I almost cried while watching this movie, my friend cried a lot, it's amazing, apart from djamel's moroccan words, when he's supposed to be from setif, do they say daba in Setif Noureddine? lol, he does! anyway, I won't spoil the movie, it's just so ALGERIAN!

Contributor
saha bon, for the people who downloaded it.. does this have english subtitles? what language is used.. can we obtain subtitles?

Meriem, Meriem.. Meriem... look at the speed i was downloading at

Thank you for sharing

I'm in a country with no president and I can still download, shouf Lilia meskina, hahahah sorry Lili .gif' class='bbc_emoticon' alt=':)' />


Beebs, shouldn't the movie be translated as Outlaws?

jamais.. ana ? i would never do such a thing

Beebs, shouldn't the movie be translated as Outlaws?

True, but for some reason its official name is Outside the Law.

I have also added the subtitles so you guys can download them along with the video.

Meriem, Meriem.. Meriem... look at the speed i was downloading at

O_O so you had it in.. like what? three minutes


Thanks for sharing the link to the movie Beboo

Thank you folks! wanna add this torrent linky to the list

Thanks bro! I added it to the main post

You're more than welcome man

i love this film! i hope it wins the oscar! very intense and taboo breaking ... I just posted about it on my blog HERE
http://casbah-dz.blo...ors-la-loi.html

Simplicity's table by the sea

cooking and culture from Algeria and the Mediterranean

Contributor
Henia, did u write all that review on your own?

that's impressive... Do you want a job in my company? I need an article writer lol.

YAAAAAAAAAAAY
thaankksssss..i've been googling for hours for this
oki maybe 10 mins
but thank youuuuu

Edit : u can use our links beebo with the forum name

no meriem we said " déjà" in french

love your idea bro, btw are the links the same file i posted or different? I just want to know to make sure the subtitles will be in sync

JazakAllah. We were going to see this at the cinema and can now see it at home instead

Shaqiq said "Weeping over past (misdeeds), being afraid of perpetrating a sin again, forsaking the company of evildoers, and adhering to the company of righteousness - these are the hallmarks of a (sincere) repentence."

Back to Algerian Movies